If it was possible for you to throw a stone in a pool while physically feeling the weight of this stone in the palm of your hand, while it does not belong to the real world?

What if you feel your balance wobble on a tiptoe walk at the edge of a virtual skyscraper?

In the virtual industry, one of the latest advances is the integration of physics and its laws with virtual reality experiences. This is what SkyReal has achieved by incorporating into the latest version of its VR solution, the parameters allowing the user to recognize and physically analyze the elements constituting his virtual environment.

Integration of the physical characteristics of objects into virtual reality

Integrating physics and mechanical laws into its VR solution, SkyReal doesn’t seek to replicate the exact reality of our world, but  rather reinforcing the experience that it has to offer of virtual reality. The aim is not to create a reality simulator that in terms of training and learning would have less possibilities to offer than a situation actually experienced.

The physics (Newtonian) integrated with Skyreal is considered on a simplified model, with its actions and its reactions of objects to each other.

More simply, it is possible to take an object, to release it and to see it fall on the ground. Gravity is therefore integrated into the perception of the user in his virtual reality environment, with here an object that he would have to move in space. The goal is to make the user experience even more faithful and realistic by integrating interactions with objects. 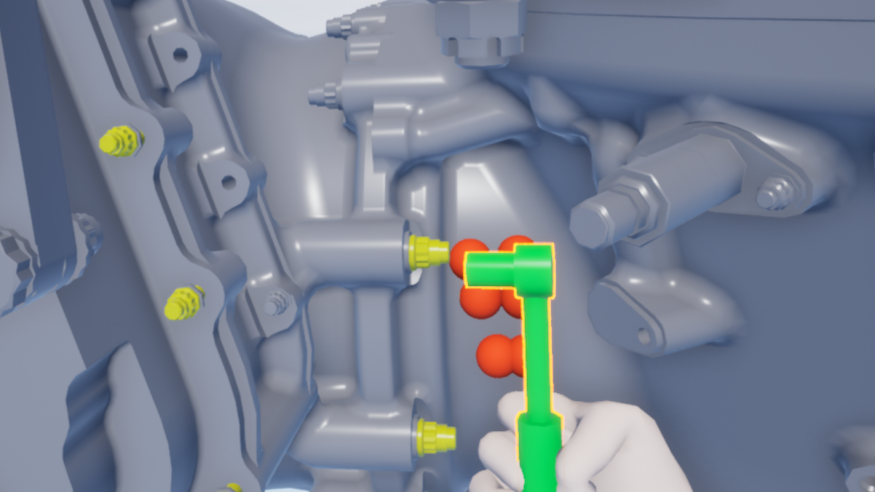 The physical characteristics of each object are set to be integrated into the Skyreal simulator. Initially these characteristics are the same for each object. They will then be able to be modified by the user as he wishes. The parameter of the gravity for example, can be deactivated on certain tools so that the operator can find them near him after use, rather than fallen to the ground if he is to work at height, on a wing of plane for example .

There are other physical parameters that allow you to link the parts together. The physical connections such as the pivot, the slide, the ball joint, the plan plan or the engine are part of it. Today these parameters are edited via Unreal Editor © and are limited by Game Engine adapted to the world of virtual reality. They remain quite far from a simulation of reality.

Physics integration : Reproduction of the senses

In order to integrate the laws of physics with virtual reality, the restitution of the senses and in particular touch is a key issue to the success of a user experience, which is closer to reality.

The objective pursued by SkyReal with physics integration is to support the democratization of virtual reality by integrating sensory technologies into its solution that will make it even more immersive, so that each user can appropriate it according to their own needs.

How to feel then the rebound of a football on his foot during a juggling session?

To recreate and transmit to the user this feeling, it will be necessary to reproduce the muscular contraction when receiving the ball on the foot, by electrostimulation. But it will also use an algorithm built into the program, correlate gesture movement in virtual reality, so that the feeling of control or return of the ball is faithful.

The stimulation of smell and taste in virtual reality is also part of the next stages of development. In Malaysia, researchers are already trying to stimulate the olfactory cells of the nose through electrodes. The goal is to bring to a VR experience, in addition to touch, a new sensory attribute making the simulation even more immersive.

The issue of physicalization of objects in virtual reality

Another technical problem encountered when integrating parameters specific to mechanical physics is the physicalization of objects. Transforming physical objects with a complex structure into virtual objects can be difficult to achieve.

To achieve this, Skyreal has designed an algorithm that can simulate the effect of a balloon that deflates around an object. This allows, although there are technical limits, to give the general shape of the object without however allowing to reproduce the concave asperities of the objects. This is the case of aircraft envelopes which by definition are concave.

Skyreal brings to its VR software concepts inherited from physical laws to enable users to enhance their virtual reality experience. Embedded in a logic of strong immersion, the realization of this advance presents however constraints inherent to a will to propose a simplified simulation of the real world.