Once created, users have several possibilities to set a manikin’s posture:

Users are now able to customize their manikin representation, with male and female bodies, as well as various equipment (hats, helmets…) 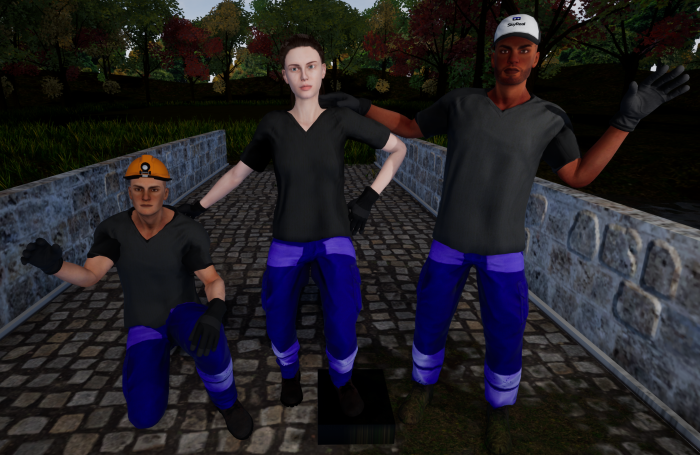 Users can now use lights during their VR experience. These lights are especially useful in dark scenes, enhancing user immersion and recreating real-life conditions.

Users can now use CutGeometry features, which allow the user to see inside assembled products without having to take them apart. CutGeometries can be either static or dynamic.

The new Prep Update feature in SkyPrep allows users to be more efficient in their work with SkyReal. Thanks to this new option, users can now directly update an existing simulation with modifications they have made in the original CAD file.

This means that only the updated parts will be updated in the simulation file, hence reducing process time and allowing users to have access to their changes in VR almost instantly.

SkyReal now gives users access to a minimap, allowing them to view a miniature version of the simulation, as well as the position of all of the users currently in collaboration in virtual reality.

Thanks to this new VR feature, users will also be able to quickly navigate in the simulation by teleporting to precise positions or directly.

Users can now create filters to identify and select certain parts of their simulation based on logical rules and metadata.

Thanks to these filters, it is now possible to color parts depending on their hierarchy or design updates, and to filter them based on their physical characteristics.

During SkyPrep preparation, users can now add their own tools to their simulation file, which they will be able to use during their VR experience.

All of the imported tools will be available from a tools’ catalogue, allowing the user to choose which tool, they wish to spawn into their simulation.

Whilst in VR, users can now capture 360° pictures of the simulation from their current position. This will automatically be saved to the user’s computer and can be shared.

Our support team has created a new, complete and detailed online documentation, which can be found here: https://docs.sky-real.com/

Everything has been designed so that our users can find all the information they need to get best out of SkyReal.