Modern industrial design is much denser in information and parameters because it includes the human factor as well as its degree of involvement in the man-machine relationship. This is now leading more and more virtual reality solution publishers to question the place of the human body as a whole, within software development and VR tools. From then on, the human factor in the virtual work environment, tends to become a strong challenge of virtual reality, like the concept of virtual manikin that we are going to see there.

The concept of virtual manikin

Although the concept of virtual manikin is already widely used in the fashion industry to highlight collections, it is in the industrial sector as a puppet integrated to a virtual reality environment, allowing to reproduce the movements of an operator (of an individual). This virtual manikin will allow to measure concretely the human factor and its components in a working environment. Manipulable, it makes possible to reproduce physiological rules of the human being to better analyze them within the framework of a simulation, with a goal of learning and optimization for a real scenario.

The automotive industry, the logistics and assembly lines, have also integrated the virtual manikin to their production logic. For their part, engineers and ergonomists can already make accessibility tests, collisions of individuals in the same spaces of collaboration and ergonomics.

There are currently two methods of tracking the human body in a virtual reality environment. 3-point tracking and Full Body Tracking.

The 3-point tracking consists of analyzing the movements of the head detected thanks to the VR helmet and those taken on the controllers held in each of the hands. This is the simplest tracking method possible and also the most widespread.

Full Body tracking goes further in the recovery of data related to the gesture of the body, since it aims to analyze the main joints of the human body. The head, the hands, but also the arms, the forearms, the bust, the ankles. The tracking of the knees remains quite uncommon to the extent that the knee has only one movement of freedom in its articulation.

The other measure of possible movement, although infrequent too, concerns the hands since they can be analyzed separately from the controllers, in order to materialize the handling of a tool or an object for example.

To answer this problematic and to fill a difficulty of interpretation due finally to a lack of data, SkyReal has designed algorithms which allow to set limits of choice in the way to simulate. Specifically, a man who leans forward, head straight aligned with the bust, can either be interpreted as a step forward or be interpreted as an action, an intention to simply bend forward.

Thus, to be able to arbitrate between two postures, the interpretation of Skyreal will be based on the idea that the human body will be in a natural position, comfort and in search of the least restrictive movement, requiring less effort.

No choice on the tracking mode

The elements brought by the Full Body Tracking open the way to the concept of virtual manikin. Reconstituting the human body as it functions and articulates itself in reality becomes possible, making the appreciation of body movements in virtual reality much finer.

To reproduce in VR the pressure of the feet stuck on the ground, to manage the leaning in front of a bust or the movement of the shoulders compared to the rest of the body brings a degree of fidelity of a real situation significant. This can bring new possibilities when editing a VR collaboration solution, such as responding to many VR issues and uses.

However, between Full Body Tracking and 3-point tracking, Skyreal finally decided not to take a stand for either of the two options. The choice finally turned on the fact of not choosing, for certainly more freedom for the user.

The tool that Skyreal provides is compatible with different systems and tracking configurations, whether 3-point tracking or Full Body Tracking.

The purpose of Skyreal is more related to the fact of being able to offer a “sandbox” in which each customer will be able to bring in VR his own environment, his own learning model and define his own tracking model.

Although most uses are related to accessibility analysis, which most often work with a 3-point tracking model, other cases can be addressed by adding trackers to the areas for which it is necessary to gather information. The elbow for the “manhole” for example or the bust for general orientation.

In the case of the analysis of “musculoskeletal disorders” (MSD), it will be preferable to opt for a Full Body Tracking method, thus making it possible to recover as much information as possible for a complete analysis of the body movements. For these applications in particular, the idea would eventually be to integrate within Skyreal’s VR programs, the clients’ MSD analysis engines (👉  Have also a look at our MSD issues article in a virtual reality context).

Visualization of the virtual manikin

In the case where the operator is considered as a virtual manikin and once the tracking points are defined, it is necessary to make them visible. It is the visualization of the body and its specificities that will make the morphology as realistic as possible.

Typical cases exist in the difference between men and women for whom the morphological rendering is not the same. Currently, Skyreal offers a man-sized virtual manikin of a size and average build. The idea is to complement Skyreal’s offering with different morphologies and then integrate virtual manikin into VR programs. The introduction of women’s morphologies, small and large bodies or different skin colors could be considered as templates, accessible to answer the problems of users of professional VR solution. 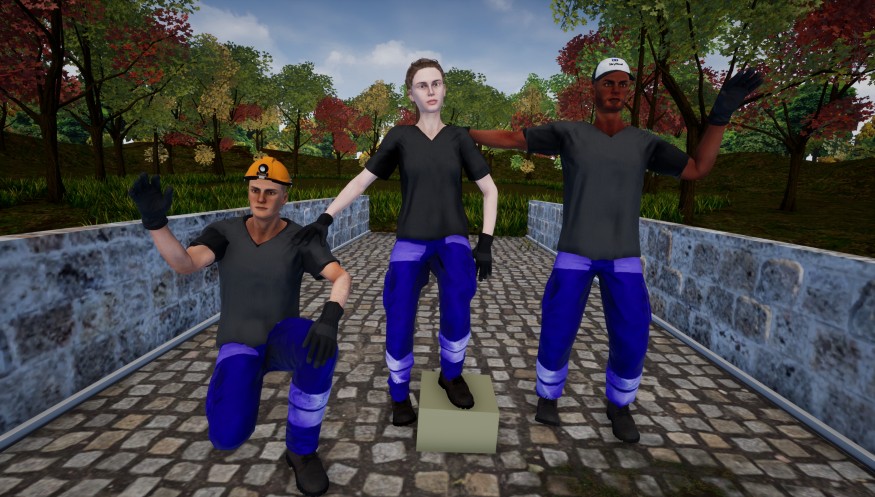 In the short/medium-term, facial expressions will have to be integrated into the virtual manikin, just like the eye movement and the synchronization of the lips with the sound, so as to make the virtual reality experience offered by Skyreal even more immersive. Future developments in hardware will come from their computing power, supporting and enhancing the immersive side of the VR experience.

Finally, the haptic, that is to say the exploration and exploitation of the sense of touch will be the next step that will allow in a more distant future, to make VR immersion even more realistic.